US sheds most jobs in a decade, ending record hiring streak

US sheds most jobs in a decade, ending record hiring streak 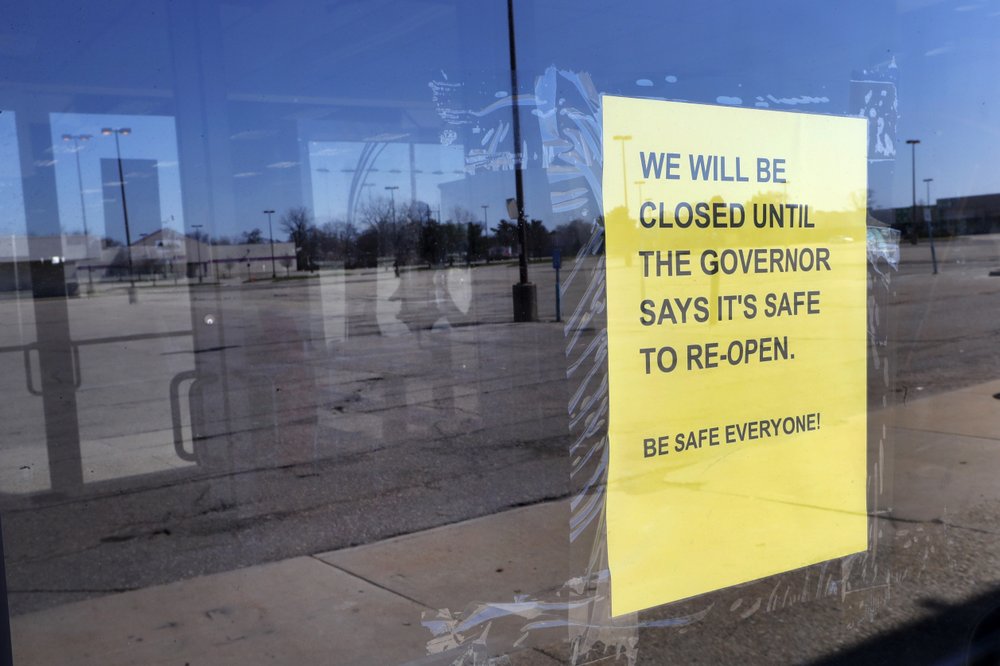 WASHINGTON (AP) — A record-long streak of U.S. job growth ended suddenly in March after nearly a decade, as employers slashed hundreds of thousands of jobs because of the viral outbreak that has all but shut down the U.S. economy. The unemployment rate jumped to 4.4% from a 50-year low of 3.5%.

The job loss of 701,000 reported Friday by the government — the worst since the depths of the Great Recession in 2009 — is still just a small indication of what’s to come. For the April jobs report that will be released in early May, economists expect as many as a record 20 million losses and an unemployment rate of around 15%, the highest since the 1930s.

The enormous magnitude of the job cuts is inflicting far-reaching damage on economies in the United States and abroad, which are widely believed to be sinking into severe recessions. As rising numbers of people lose jobs — or fear they will — consumer spending is shrinking. That pullback in spending, which is the primary driver of the economy, is intensifying pressure on those businesses that are still operating.

Employment is down in many sectors. 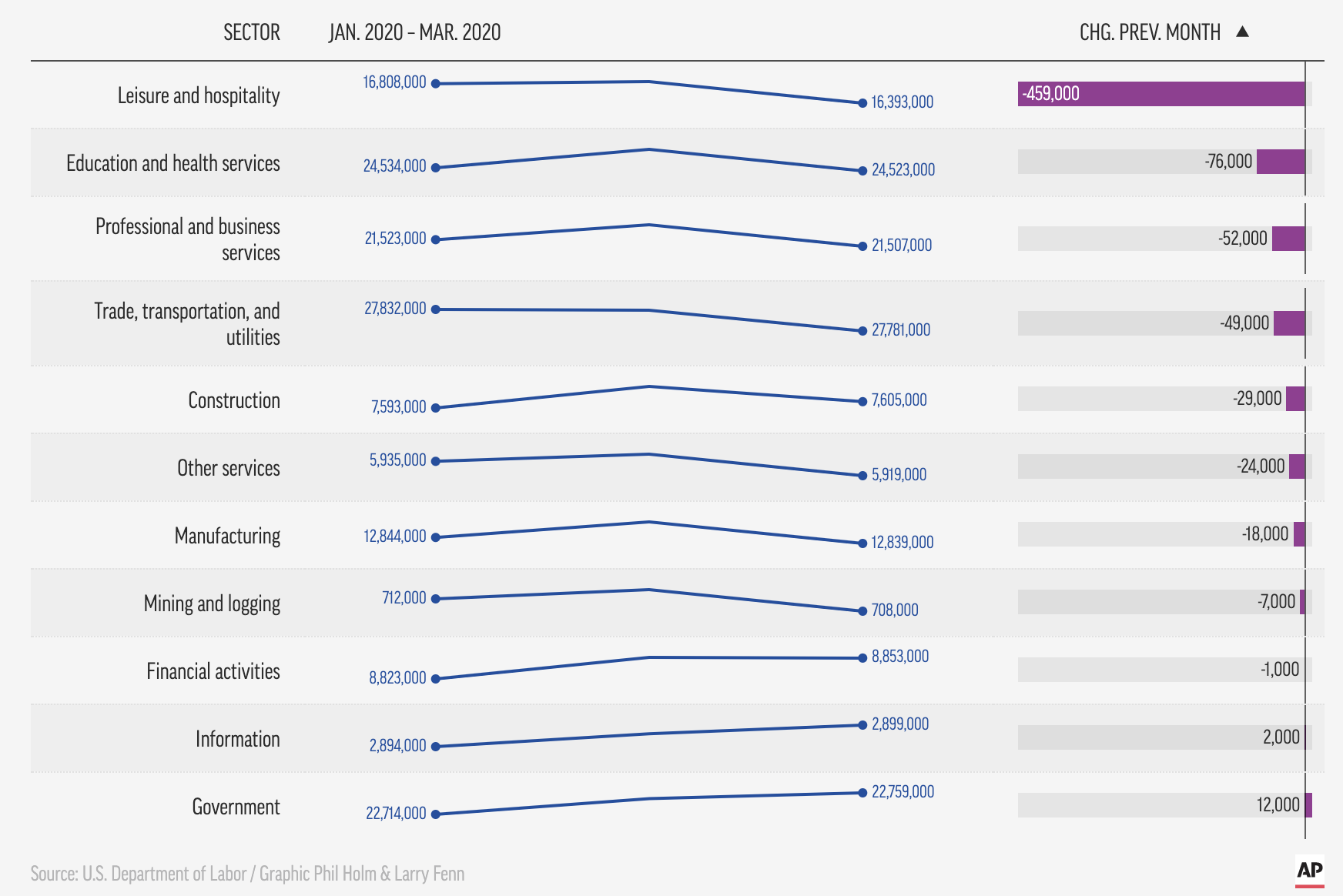 Economists are holding out hope that an extraordinary series of rescue actions from Congress and the Federal Reserve will help stabilize the U.S. economy in the months ahead. The key goals of Congress’ just-enacted $2.2 trillion relief package are to quickly put cash in people’s hands and incentivize companies to avoid job cuts or quickly recall laid-off employees.

Still, even factoring in the government’s intervention, Joel Prakken, chief US economist at IHS Markit, predicts that the economy will sharply contract in the April-June quarter — by a 26.5% annual rate, the worst on records dating to just after World War II.

The federal relief package, which includes an extra $600 a week in unemployment benefits on top of the usual state benefits, will ideally enable the millions of newly jobless to pay their rent and other bills. But it won’t make up for the vast array of spending that Americans typically engage in that has now been lost — from eating out and paying for gym memberships to buying new furniture, autos and electronic gadgets. Indeed, Oxford Economics says that for the April-June quarter, that pullback will likely cause the sharpest quarterly drop in consumer spending on record.

The job losses during March were likely even larger than what was reported Friday because the government surveyed employers before the heaviest layoffs hit in the past two weeks. Nearly 10 million Americans applied for unemployment benefits in the final two weeks of March, far exceeding the figure for any corresponding period on record.

Last month’s job loss was derived from surveys of employers that were conducted in mid-March. The enormous layoffs that were reported over the past two weeks occurred only after those surveys had been completed. They will be reflected in the jobs report for April.

This was an ugly jobs report, showing that the pain in the economy started in early March, well before the spike in the weekly initial jobless claims data,” said Joseph Song, an economist at Bank of America Securities. “It is going to get much worse in coming reports.”

Brad Hershbein, senior economist at the Upjohn Institute for Employment Research, said that last month’s job loss likely reflected nervousness among businesses that had cut back on hiring even before the flood of layoffs.

One sign of how painfully deep the job losses will likely prove to be: During its nearly decade-long hiring streak, the U.S. economy added 22.8 million jobs. Economists expect the April jobs report being released in early May to show that all those jobs could have been lost.

Lower-income service workers bore the brunt of the job cuts in March, with restaurants, hotels and casinos accounting for roughly two-thirds of the cuts — a loss of 459,000 jobs. Retailers shed 46,000.

Yet the layoffs have also begun to creep into many other corners of the economy. Doctor’s offices sliced 12,000 jobs, the most on records dating to 1972. Law firms cut 1,700. Banks and real estate companies also cut jobs. The nearly full point increase in the unemployment rate from February to March was the sharpest monthly rise since 1975.

There were some quirks in the jobs report that suggest it may be harder than usual for the government to track the impact of the virus. The government said the unemployment rate would have been nearly 1 percentage point higher if many workers who were told to stay home because of the coronavirus — most of whom aren’t being paid — had been properly classified as temporarily laid-off. Instead, many of those workers said they still had jobs.

Even with that quirk, the number of people who said they were on “temporary lay off” soared to 1.8 million, the highest since September 2009, in the immediate aftermath of the Great Recession.

A key determinant of the economy’s future will be whether businesses can survive the shutdown and quickly rehire those workers who consider themselves to be temporarily laid off. If so, that would help the economy snap back and avoid the type of weak recovery that followed the past three downturns.

But if the virus outbreak forces businesses to stay closed into the late summer, many may go bankrupt or won’t have the money to rehire their old employees. That would mean that many workers who now consider themselves on temporary layoff could lose their jobs.

So far, some large and small businesses are still paying for health care benefits and keeping in touch with their newly laid-off workers, a slightly hopeful sign amid the flood of job cuts.

More than 90% of the U.S. population is now living under some version of a shutdown order, which has forced the closure of bars, restaurants, movie theaters, factories, gyms and most other businesses. Some hotels are closed; others are largely empty. Fast-food chains are either closed or providing only drive-through service, costing thousands of jobs.